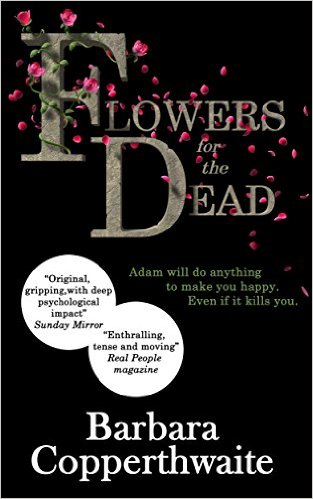 ADAM WILL DO ANYTHING TO MAKE YOU HAPPY. EVEN IF IT KILLS YOU.
Adam Bourne is a serial killer who thinks he is a saviour. When he murders young women and cuts off their lips, he believes he has done it to make them happy.
How did he become warped from the sensitive four-year-old who adored his gran and the fairy tales she read to him? What turned him into a monster who stalks his victims? And what is he trying to say with the bouquets he sends?
When he meets Laura Weir, Adam weaves a fairy tale romance around them. A tale she has no idea she is part of. As he hatches his twisted plan for their fairy tale ending, can anyone stop him before he creates the ultimate sacrifice to love?

Once in a while a book comes along that is so different to anything else that I’ve read it kind of takes my breath away! It has taken me a long time to read this book (kindle problem mainly!) but it’s one of those that you need to savour and slowly digest to get every last drop of brilliance from it. It’s like a fairy tale of old, when they were gruesome and scary, something not allowed in our politically correct world today! And this adult fairy tale certainly didn’t have a happy ending!

Adam Bourne is a serial killer. We know that from the start, this is no “whodunit”. But Adam is unlike any serial killer you have ever met before. I don’t think I have ever developed such an emotional attachment to a fictional baddie before. I just wanted to reverse the clock for him and change his history as Adam was a classic example of “nurture versus nature” which is a huge interest of mine. Without his upbringing would Adam have killed? Was he born with psychopathic tendencies? Barbara Copperthwaite has written a character that you feel tremendous sympathy for, more so than his victims and that takes a very clever author!

I loved the way that the chapters were named after flowers and their meanings, although it took me a while to notice that, so caught up was I in Adams story. It was details like that that made this book such a pleasure for me to read, I also noticed the flower theme continued subtly with Mike’s daughter name! Mike, Laura and Adams grandmother were also very interesting characters especially Mike who’s emotions and actions of being a widow and single father were perfectly handled throughout.

I had this book on my kindle for a while before reading it waiting for the right time to read as I had heard it was a bit gory in places but after reading it I can say that although gruesome it is absolutely integral to the plot so please don’t be put off by anything you have heard before. I had that feeling of loss once I had finished it and even now just have an incredible sympathy for its main character-it’s a weird feeling!

Barbara Copperthwaite is a national journalist in the UK, with over twenty years’ experience, including as an editor of several UK publications. Her debut novel, Invisible, was an Amazon best seller. She was raised in the seaside town of Skegness, Lincolnshire, which is where she became a bookworm and lover of the written word. Her fascination with crime began when she briefly worked in a men’s maximum security prison, before a brief stint as cabin crew… It was a circuitous route to journalism and novelist, but she got there eventually.

Available to buy now at Amazon

15 thoughts on “Flowers for the Dead by Barbara Copperthwaite”