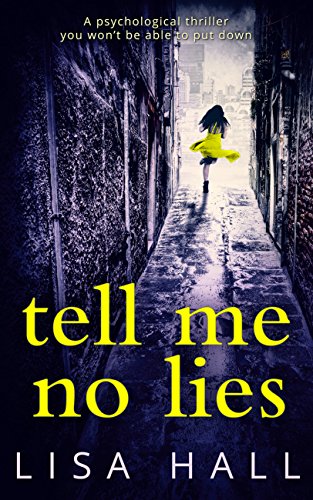 I have been having the best time during my first year of blogging and it’s been such good fun revisiting the top posts of each month. In October I had the second biggest reaction since I started my blog and it was for….Tell Me No Lies by Lisa Hall. I LOVE this book so I’m so happy to share that review again today!

Tell Me No Lies by Lisa Hall #BookReview @LisaHallAuthor @HQstories

Don’t. Trust. Anyone.
It was supposed to be a fresh start.
A chance to forget the past and embrace the future.
But can you ever really start again?
Or does the past follow you wherever you go…
Steph and Mark have just moved house, trying to find a way forward after all the secrets, lies and betrayal.
But starting over isn’t always easy. Especially when someone will go to any lengths to make sure you never forget…

Tell Me No Lies has been one of my most anticipated reads this year. I just loved Between You and Me so I had this on my wishlist as soon as it was up on Amazon. But I was also a little bit worried-how on earth was Lisa Hall going to follow her fabulously twisted debut novel? Well I should have had more faith as I have to say that she absolutely blew my mind here! There I was smugly reading away, thinking I knew exactly what was going on, when BOOM! That ending! And the build up to that big reveal was just so unexpected and jaw dropping that I raced to the end with a feeling of sheer helplessness.

The tagline on the cover of this book is “Dont. Trust. Anyone.” and that pretty much sums up how I read this book because I suspected absolutely everyone. And when I say everyone, I do mean EVERYONE! Is someone out to mess with Steph and destroy the cosy family life that she has built up for herself after the dreadful trauma of her past? Or has her pregnancy caused some sort of psychosis and made her a danger to herself and her unborn child? There are red herrings galore here and you will find yourself questioning not only Steph’s sanity but probably your own as well. It brought to mind the term “gaslighting” (which came from the old black and white movie Gaslight, a big favourite of mine) where victims of psychological abuse are slowly deceived into doubting their own sanity. So who is really behind all the disturbing things that are happening to Steph and why?

I physically couldn’t put this book down. It had all the ingredients I needed to get my pulse raising and my brain aching! Whilst the characters were intriguing, none of them were particularly likeable which also added to the overall feeling of malevolence running through the book. I did find myself wanting to shake Steph a few times and shout at her “For God’s sake open your eyes woman!!” as her apparent naivety refused to abate throughout the terrible things affecting her.

Lisa Hall has now established herself as a writer of first class domestic psychological suspense and has in the process become a firm favourite of mine. And I have to say that, for me this actually has the edge over Between You and Me, I definitely found it a much more compelling tale with a broader spectrum of plotting. Tell Me No Lies will grip you right from the first page with its short but chilling prologue until the final shocking denouement. And I recommend you go back and read that prologue again once you’ve finished, it actually gave me goosebumps when I did!

Loved, loved, LOVED this so highly recommended by me.

I received an advanced copy from the publisher HQ and this is my unbiased review of that book.
Tell Me No Lies: A new gripping psychological thriller from the bestselling author of Between You and Me will be published on 20th October by HQ and is available to buy here at Amazon UK.

LISA HALL loves words, reading and everything there is to love about books. She dreamed of being a writer since she was a little girl and after years of talking about it, was finally brave enough to put pen to paper (and let people actually read it). Lisa lives in a small village in Kent, surrounded by her towering TBR pile, a rather large brood of children, dogs, chickens and ponies and her long-suffering husband. She is also rather partial to eating cheese and drinking wine. Readers can follow Lisa on Twitter @LisaHallAuthor