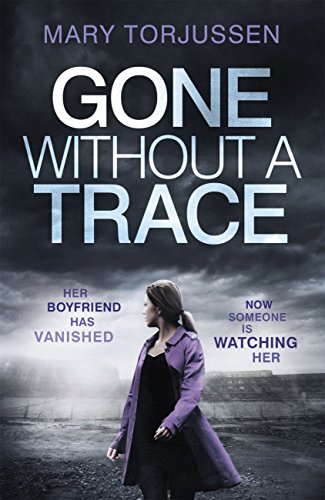 No one ever disappears completely…

You leave for work one morning.

Another day in your normal life.

Until you come home to discover that your boyfriend has gone.
His belongings have disappeared.
He hasn’t been at work for weeks.
It’s as if he never existed.

But that’s not possible, is it?

And there is worse still to come.

Because just as you are searching for him
someone is also watching you.

Oh my goodness! I feel like an emotional wreck, wrung out like a dishcloth and in need of a calming cuppa! What an intense and unputdownable book this is. To be honest when I bought it, I didnt actually expect it to be as big a real pager turner as it was- I just liked the sound of the blurb and fancied a nice easy read! But what I got instead was a complex and compelling story with a neurotic central character that I alternated between feeling sorry for and wanting to shake some sense into! There are so many books around at the moment with similar storylines, or so I thought originally, but this one has taken that “mystery disappearance” and combined it with your “unreliable narrator” and given us something much deeper, with an intriguing and addictive plot.

There’s an underlying dark humour here, alongside a whole host of red herrings and questionable characters -all of whom I suspected of a level of wrongdoing at some point. The atmosphere created is dark and chilling throughout which raised the tension rapidly towards that shocking denouement. Most of the time when I read this genre I do at least have a slight inkling of where its going but here I really struggled to get a hold of possible threads that could lead me to ANY possible explanation for Matt’s disappearance. So the last few chapters were hurriedly read with my mouth open, shocked, until I got to that absolutely perfectly pitched epilogue. Mary Torjussen is such a natural storyteller that she spins her perfect little plot web to trap you so that you don’t have any inclination to escape it.

This was such an enjoyable rollercoaster of a book for me. I will be absolutely be reading more from this author as this stood head and shoulders above other books I’ve read within this genre recently. In fact, it wasnt until I came to put this review on that I realised I had actually read another book by Mary Torjussen “My Time Your Time” back in 2014 which I also gave 5* to! So maybe I shouldn’t have been as surprised as I was that I totally loved Gone Without a Trace.

Gone Without A Trace: Her boyfriend has vanished. Now someone is watching her.

was published by Headline on 3rd November 2016 and is available to purchase from Amazon UK here.

Mary Torjussen grew up in Stoke-on-Trent. There was no television in her family home so books have always been her escape – she spent hours reading and writing stories as a child. Mary has an MA in Creative Writing from Liverpool John Moores University, and worked as a teacher in Liverpool before becoming a full-time writer. She has two adult children and lives on the Wirral, where her debut novel, GONE WITHOUT A TRACE, is set.

16 thoughts on “Gone Without Trace by Mary Torjussen #BookReview”