Today I’m thrilled to be on the blog tour for a stunning debut crime thriller by Patricia Gibney introducing Detective Lottie Parker. 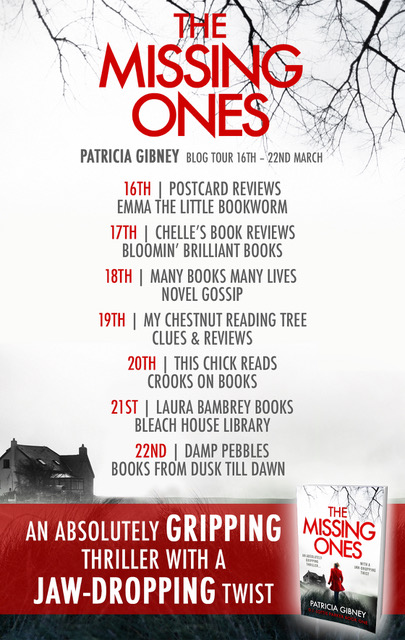 The hole they dug was not deep. A white flour bag encased the little body. Three small faces watched from the window, eyes black with terror.

The child in the middle spoke without turning his head. ‘I wonder which one of us will be next?’

When a woman’s body is discovered in a cathedral and hours later a young man is found hanging from a tree outside his home, Detective Lottie Parker is called in to lead the investigation. Both bodies have the same distinctive tattoo clumsily inscribed on their legs. It’s clear the pair are connected, but how?

The trail leads Lottie to St Angela’s, a former children’s home, with a dark connection to her own family history. Suddenly the case just got personal.

As Lottie begins to link the current victims to unsolved murders decades old, two teenage boys go missing. She must close in on the killer before they strike again, but in doing so is she putting her own children in terrifying danger?

Lottie is about to come face to face with a twisted soul who has a very warped idea of justice.

Lottie Parker is my kind of police officer and I have taken her to my heart already. She is my own personal favourite – a strong female lead, good at her job but struggling with her own personal demons which make her realistically normal! I loved her relationship with her kids and I thought their family dramas and conflicts were detailed with just the right amount of realism making them like every other family with teenagers, the only difference being that this family is now a single parent one after the death of Lotties husband. Which leads us to Lotties relationship with her colleague Boyd which was one of the most tender and poignant I have come across in a while. This is a partnership I will follow with interest as this series continues.

Plotwise this grabbed me by the hair and dragged me kicking and screaming through all the suspects but I didn’t guess who or the reason behind the seemingly connected murders. The first victims death I took particularly badly as it was a character I would have loved to have seen develop and have their own personal happy ever after but it wasn’t to be.

There was a real underlying feeling of loss and a terrible burden of sadness throughout this book. Not that it made me feel depressed or anything but it just made me hug my family just a little bit tighter after I finished it. Patricia Gibney writes beautifully with well crafted descriptive prose that flows perfectly so that before you know it minutes have passed while you have been utterly entranced by  Lottie and her surroundings. I’m ecstatic to have discovered a new detective series to follow especially one created to such a high standard with believable characters and plotting.

If you love Angie Marsons Kim Stone series then you will love one too. Highly recommended by me.

Thanks to Bookouture for my review copy of The Missing Ones which I have chosen to read and review.

The Missing Ones is published by Bookouture on 16th March 2017 and you can click  The Missing Ones: An absolutely gripping thriller with a jaw-dropping twist (Detective Lottie Parker Book 1)

to purchase the ebook from Amazon UK.

One thought on “The Missing Ones by Patricia Gibney #BlogTour @Bookouture”