It was the happiest day of her life. Little did she know it was also the last.

When a woman’s body is found in the grounds of a ruined priory, Detective Imogen Evans realises she is dealing with a serial killer—a killer whose victims appear to die in a state of bliss, eyes open, smiles forever frozen on their faces.

A few miles away, single dad Ben Hofland believes his fortunes are changing at last. Forced to move back to the sleepy village where he grew up following the breakdown of his marriage, Ben finally finds work. What’s more, the bullies who have been terrorising his son, Ollie, disappear. For the first time in months, Ben feels lucky.

But he is unaware that someone is watching him and Ollie. Someone who wants nothing but happiness for Ben.

It’s the highlight of my year when a new Mark Edwards book is published! His books have just been getting better and better so I’m always dying to see where his warped imagination is set to take me next. He is one of the few authors I can trust to shock the hell out of me and I am consistently scared witless by the little nods to the horror genre that he slips into his plots with ease. Saying that, this is probably not one of his most visually scary storylines for me as it veered more towards crime thriller/police procedural than usual but that didn’t stop my enjoyment of it one little bit!

What sucked me in most this time were the wonderfully observed characterisations. I just loved the awkward but loving relationship between Ben and his son Ollie. Ben was struggling with becoming a single parent after the breakdown of his marriage to Megan and a new start had to involve a move back to his childhood home of Shropshire to be close to his dying mother. After the first grimly described murder, it becomes obvious from the killers POV that Ben and Ollie are going to be on this serial killers hitlist. How many times have you thought “If that happened to me at least I’d die happy”? Well, that is literally what this murderer wants to do for you!!! On his trail is the gorgeous but self contained Imogen. Can she figure out who he is before it’s too late for Ben and Ollie?

It always fascinates me how Mark takes little vignettes from real life and weaves a whole fictional story around that chance meeting or overheard conversation. His mind really does work in a mysterious way! Once my head is stuck in a Mark Edwards book, it isn’t coming out until I’ve sucked it dry. There were the usual twists and turns here, some expected others coming as quite a shock, and a whole cast of suspects who gathered together in quite the shoal of red herrings! I really enjoyed it from start to (very creepy) finish and I still shudder even now when I think about those murder victims laid out for discovery with those smiles on their faces.

Mark Edwards does exactly what he sets out to do with his books. He entices, he shocks and he entertains. Whilst this book hasn’t overtaken The Magpies for me it is still an engrossing and chilling crime thriller with characters that I would love to meet again (well, most of them anyway and not in real life….or the dark!!!)

is published by Thomas and Mercer on 15th June 2017 and is available to purchase from Amazon UK. 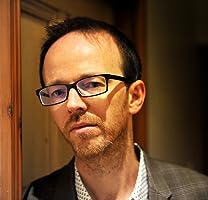 Mark Edwards writes psychological thrillers in which scary things happen to ordinary people, and is inspired by writers such as Stephen King, Ira Levin, Ruth Rendell and Linwood Barclay.

He is the author of four #1 bestsellers: Follow You Home (a finalist in the Goodreads Choice Awards 2015), The Magpies, Because She Loves Me, and The Devil’s Work, along with What You Wish For and six novels co-written with Louise Voss. All of his books are inspired by real-life experiences.

Originally from the south coast of England, Mark now lives in the West Midlands with his wife, their three children, a ginger cat, and a golden retriever.

Mark loves hearing from readers and can be contacted via his website, http://www.markedwardsauthor.com.