After breaking off her engagement with Michael, Suzanne is still looking for The One. Bored with her freelancing job, she decides to take matters of both work and love into her own hands and Five Parks is born.

She starts a blog, offering five prospective suitors a chance of one of five dates in five London parks. Suzanne’s blog goes viral, amassing a huge following and even getting a column in a daily newspaper.

But after the fifth date – which she has no memory of – Suzanne wakes up shackled to a bed in a windowless room. The only items with her are a table, a chair and a laptop.

And an instruction from her captor: Keep Writing.

Oh wow! (If I wasn’t such a well brought up middle aged Cheshire housewife I may have gone down the OMFG route!!) This book is twistier than my iPhone earphones when they’ve been at the bottom of my handbag for a week! And they are VERY tangled, just like the plot of this extremely clever and very socially relevant debut thriller from journalist Ross McGuinness. After I finished it late last night, I still felt like my brain was on a superfast spin cycle with all the shocking plot twists going round in my head gloating because they had completely managed to fool me. Yes that’s right this, often unbearably smug, reviewer who 99% of the time works out exactly where the plot is heading and who the “baddie” is was left totally flabbergasted with her jaw rather firmly dropped onto the floor at the outcome of Five Parks. This book is really rather clever and I can guarantee that, like me, you will want to inhale its gripping narrative in one full on, rollercoaster ride of a sitting.

I get lots of review requests and have actually closed my contact form down for the rest of 2017 due to struggling to find time to climb Mount TBR but as soon as I had the request for Five Parks I was so intrigued by its description that I instantly knew I had to read it. It’s use of social media, online dating and blogging made it stand out as a book very much of our time and I was curious to see how it was played out on the pages of a “whodunnit” thriller. To be honest, though, the first few pages had me literally scratching my head as I was rather confused as to what was happening but as soon as I took onboard the styling of the narrative I was HOOKED!! And it then made much more sense as to why the story was been played out that way with us being kept in the dark as much as Suzanne, our victim here, who was locked away by her unknown captor with only one instruction-for her to keep on writing.

I honestly thought I was being such a clever clogs spotting the villain of the piece after meeting all of Suzanne’s dates. But I was miles off!! Even my reserve suspect (I always have another suspect on standby!) wasn’t anywhere near the most shocking reveal I have read in ages! The lead up to that very intense denouement had certainly thrown up a few red herrings but I really enjoyed how the author introduced us to all the dates and I had fun trying to work out what their connections (if any!) were to Suzanne. After meeting dates #1 to #4 the fifth date was a bit of an enigma though , a puzzle waiting to be solved by both the reader and the captive Suzanne, as all the clues were presented to us. I thought the plot was an ingenious and unique idea and the way it was cleverly crafted with an online blog telling Suzanne’s story, as well as newspaper articles relating to the Five Parks dates, worked really well. Both of these concepts complimented the present day investigation by Suzanne who was desperately trying to remember date 5 so she could work out who was holding her and why. Being shackled and kept in the dark certainly added a different meaning to the term “blind date” and probably wasn’t quite what she’d had in mind when the Five Parks idea had been conceived!

I’m not sure why (possibly because I had a picture in my head of the park settings around London) but there was something about this authors writing that reminded me of SJ Watson at times. His intricately plotted storyline gave me that same thrill that I had when I first read “Before I go to Sleep”. Not because of any plot similarities, there was just a familiar “tingle” that suggests that Ross McGuinness is going to be an author to keep a very close eye on in the future. And, like Before I Go To Sleep, I think Five Parks would make an amazing transition to the big screen! I’m casting “the dates” in my mind as I write!

I just loved this book! And I’m so glad it enticed me in from that very important “back of the book” blurb. Occasionally there are books out there that are tailor made for you but, like online dating, sometimes you just need to be found so you can take a chance on that risky pairing. It could just be that you’ve met your perfect match!

is available to download now from Amazon UK (affiliates link). It is on special promo at 99p at the moment for a limited time only! My review copy came from the author. 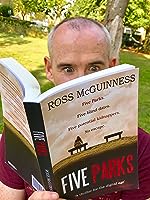 Ross McGuinness is a journalist. He has written for Metro, Yahoo, The Guardian and the BBC. He lives in London. He can be found on Twitter at @McGuinnessRoss.