I’m thrilled to be on the blog tour today for Force of Nature the second Aaron Falk book by Jane Harper.

FIVE WENT OUT. FOUR CAME BACK…

Is Alice here? Did she make it? Is she safe? In the chaos, in the night, it was impossible to say which of the four had asked after Alice’s welfare. Later, when everything got worse, each would insist it had been them.

Five women reluctantly pick up their backpacks and start walking along the muddy track. Only four come out the other side.

The hike through the rugged landscape is meant to take the office colleagues out of their air-conditioned comfort zone iand teach resilience and team building. At least that is what the corporate retreat website advertises.

Federal Police Agent Aaron Falk has a particularly keen interest in the whereabouts of the missing bushwalker. Alice Russell is the whistleblower in his latest case – and Alice knew secrets. About the company she worked for and the people she worked with.

Far from the hike encouraging teamwork, the women tell Falk a tale of suspicion, violence and disintegrating trust. And as he delves into the disappearance, it seems some dangers may run far deeper than anyone knew.

If you’re a regular reader of my reviews then you will know that there was one book from last year that I recommend to everyone and that, thankfully, everyone who has read it after my recommendation has loved it too. That book was The Dry by Jane Harper. So I was slightly torn when I knew that she was bringing Aaron Falk back in her second book as, although I was desperate to read about his character further, I was concerned that this case wouldn’t match up to his previous highly emotional storyline. Would “the curse of the second book” mean that Force of Nature would fail to live up to my expectations? No of course not!! Jane Harpers follow up novel is just as intriguing and beautifully complex as The Dry and I was completely gripped from start to finish.

I don’t know how she does it but I am always immediately transported to the setting in this authors books. In The Dry, I could feel the heat of the hot Australian sun during a drought and here I shivered as I experienced the chill of their bush trek, almost feeling the drips of cold rain trickling down my back. The sense of placement is extraordinarily important to the plot of both books and Jane Harper nails it again here. I felt I was actually walking alongside the women as they became further removed from their path, both physically and emotionally.

I can actually think of nothing worse than taking part in a team building exercise over several days with a group of women I had nothing in common with but there were underlying tensions simmering beneath the surface here that meant I became deeply involved in the plot trying to work out what those hidden feelings were. And what has happened to Alice? How did she she go missing and why? Those questions were uppermost in my mind as Aaron Falk and his partner Carmen try to solve Alice’s disappearance.

I loved the atmospheric tension here which slowly increased as we flashed backwards to the women on their hike. Alice wasn’t a particularly likeable character but this didn’t mean I wasn’t concerned about her disappearance as none of the women really stood out as “likeable” to me! The way they started to show their true colours once they realised they had wandered far from their designated route created an anxiety within the group that was fascinating to watch. But were any of the group responsible for what happened to Alice or is there something or someone out there watching and waiting?

Force of Nature can be read as a standalone but saying that you will definitely get more of an understanding into Aaron Falk and his relationships from the previous book, especially the one he had with his father. Theirs was an intriguing bond that was explored more deeply in The Dry but is still very much at the heart of many of Aaron’s personal decisions throughout this second book and there was a poignancy to the final chapter that left me feeling quite uplifted.

I loved Force of Nature just as much as The Dry thankfully and I’m hoping that Jane Harper brings Aaron Falk back for a third case. Fingers crossed!

Force of Nature: by the author of the Sunday Times top ten bestseller, The Dry

is available to purchase now from Amazon UK (affiliates link). My thanks to Little Brown UK for my review copy of the book. 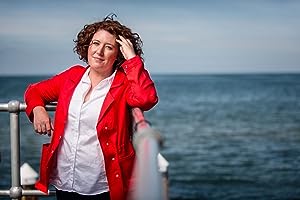 Jane Harper is the author of The Dry, winner of various awards including the 2015 Victorian Premier’s Literary Award for an Unpublished Manuscript, the 2017 Indie Award Book of the Year, the 2017 Australian Book Industry Awards Book of the Year Award and the CWA Gold Dagger Award for the best crime novel of 2017. Rights have been sold in 27 territories worldwide, and film rights optioned to Reese Witherspoon and Bruna Papandrea. Jane worked as a print journalist for thirteen years both in Australia and the UK and lives in Me