Huge thanks to Laura Nicol for inviting me onto the blog tour for the first in the new series by the fabulous Ragnar Jónasson. And for sending my gorgeously wrapped review copy that I unwrapped on Christmas Eve in the traditional Icelandic way!

A young woman is found dead on a remote Icelandic beach.

She came looking for safety, but instead she found a watery grave.

A hasty police investigation determines her death as suicide . . .

When Detective Inspector Hulda Hermannsdóttir of the Reykjavik police is forced into early retirement, she is told she can investigate one last cold case of her choice – and she knows which one.

What she discovers is far darker than suicide . . . And no one is telling Hulda the whole story.

When her own colleagues try to put the brakes on her investigation, Hulda has just days to discover the truth. A truth she will risk her own life to find.

This book has just shot onto my top books of the year list and I’m now desperate to read the next two books in the series! Why oh why did I not learn Icelandic at school instead of French!!?? Then I would have been able to move onto the second book straight away! But alas I will just have to await the English translation, which was seamless here can I just add?!

I was a huge fan of the Dark Iceland series by Ragnar Jónasson, featuring his detective Ari Thor, so was delighted but slightly apprehensive when I heard about this new Hidden Iceland series. But I wasn’t disappointed here-this new detective creation really worked for me! Hulda is a 64 year old Detective Inspector working for the Reykjavik police department. But the department are bringing in a much younger hotshot male detective to replace her and have asked her to bring forward her retirement. Hulda tries to resist but knows her days are numbered. As a compromise, she is allowed to take on a cold case mainly to keep her out of the way but Hulda gets completely involved in her new case, stepping on a few toes along the way. Now I’m a huge fan of using older women characters, especially in crime fiction, and the thoughts and feelings that Ragnar brought to life in Hulda perfectly reflected those of a woman working in a male dominated field, feeling passed her shelf life and discarded for the newest upgrade. But I was so pleased that she didn’t slink off into the oblivion of retirement instead she prepared to leave on a high, solving a case that has been as swept under the carpet as she herself has been.

Having recently attended a course about Attachment Disorder, I was fascinated by the flashback chapters told by a mother desperate to be with her child and how that affected their own developing relationship and their connection to others. It was quite horrific and incredibly emotional in places but I found it essential in the understanding of what made certain characters tick especially when there were further revelations made about their lives. And on that note I have to add that it’s a wonderfully intriguing idea to work backwards for the next two books and meet Hulda in her younger days, professionally and in her private life. Whilst Hulda isn’t always a particularly personable character, I still found myself warming to her far more than expected as the plot slowly gathered momentum and I’m intrigued to find out what my reaction will be to her younger self.

For me the ending of The Darkness was a complete showstopper – unexpected, shocking and powerfully affecting. Yes, I sobbed my eyes out when I finished it and felt drained by the emotional rollercoaster I had been riding on. Hulda is a character creation I won’t forget in a hurry and Ragnar Jónasson has placed her in a socially relevant setting which reflected her attitude perfectly.

Visiting Iceland is now on my “bucket list” and Ragnar Jónasson is single handily responsible for that! His descriptions of the cold, desolate but chillingly beautiful landscape have always been a beacon for my love affair with Nordic Noir, guiding me towards some of the best fictional detectives I have ever encountered.

is available to purchase now from Amazon UK (affiliates link). My review copy came from the publisher. 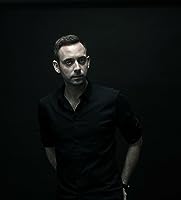 Ragnar Jónasson was born in Reykjavík, Iceland, where he works as a writer and a lawyer and teaches copyright law at Reykjavík University. He has previously worked on radio and television, including as a TV news reporter for the Icelandic National Broadcasting Service, and, from the age of seventeen, has translated fourteen of Agatha Christie’s novels. He is an international Number One bestseller.

The Darkness is the first novel in his Hidden Iceland series, to be followed by The Island and The Mist.