She thought she was free of the past. She was wrong.

Six years ago Isla was the only victim to walk free from Carl Jeffery’s vicious murder spree. Now, Isla vows to live her life to the fullest and from the outside it appears perfect.

Determined to finish her book Isla plans her final trip to Sweden, but after returning from Canada and meeting a man she never thought she would, her life begins to derail.

Suddenly Isla is plagued by memories of the man who tried to murder her, and the threat that he could be back causes her to question everything, and everyone around her.

One of the things that struck me whilst reading Her Last Lie was how easily some of the events that happen to Isla could happen in real life. One in particular brought back something that happened to me as a teenager. I was also convinced that someone was watching me and this was well before the days of social media made it the easiest thing in the world to know exactly what people are up to and where they are. A couple of times in the book Isla is awoken by a tapping on her window and let me tell you, that is one of the scariest ways to be jolted awake!! Twice I awoke up when I was a teenager to someone tapping on my window and I was absolutely terrified and unable (okay……unwilling!!!!) to get up to see who it was or if that person was still there. Both times whoever it was left a message written in the sea salt residue on my window….my name written within a heart. Even now I have absolutely no idea who left those messages or why but my parents spoke to the local police and it never happened again. Anyway I just wanted to throw that in to show that I understood how afraid Isla would have been by that one little act of intimidation.

Now then if you’re after a book that lives up to its tagline then you really need to pick up Her Last Lie! This book drove me practically crazy with impatience as I couldn’t for the life of me work out what was going to happen! It had me chopping and changing my mind every few pages with its very generous sprinkling of red herrings and heinous characters that you will just love to hate! And it didn’t go in the direction that I was expecting it to either which made this psychological thriller even more addictive for me and I flew through it in one afternoon.

Isla is a survivor. The only victim to escape Australian serial killer Carl Jeffrey’s she lives in fear of him ever being released. When she hears his sister has managed to organise an appeal of his conviction, she is terrified he will come back to finish the job. And after an unexpected meeting on the way home one night, her outwardly perfect life starts to unravel and she begins to constantly look over her shoulder. But where does the true danger lie and is the answer already held by Isla herself?

This was such a fast paced and compulsive read that I literally galloped through it desperate to find out the answers to all the questions Isla had. But I also wanted to slow down my reading at times due to the wonderfully descriptive travelogue that it descended into at times. Amanda Brittany brought a real sense of place to the destinations visited by Isla especially once she was in Sweden-I almost wanted to put on my hat and padded jacket to combat the freezing conditions, even though I was reading it in whilst sunbathing in the garden during our mini heatwave (or summer as other countries know it!!).

I really was pleasantly surprised by this psychological thriller! I thoroughly enjoyed immersing myself in Isla’s life as it started to fall apart. The slow build up of tension as she constantly questioned every little sign ad she was chased by the shadows of her past, meant her fear became a real constant throughout the narrative. My heart rate has increased even now just thinking about it! And it will make you look again at the way in which you use social media, in fact that was actually one of the scariest things about this book, the ease with which we give so much of our day to day life away to others without even giving it a second thought.

Her Last Lie is a great debut and a real find for just 99p! I’ve already popped Amanda Brittany’s unnamed book 2, which is out in December, on my wish list and I can’t wait to read it!

Her Last Lie: A gripping psychological thriller with a shocking twist! 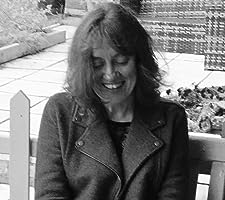 Amanda Brittany lives in Hertfordshire with her husband and two dogs. She loves travelling, and visiting Abisko, Sweden, and Queensland, Australia inspired her to write ‘Her Last Lie’.

When her younger sister became terminally ill, Amanda’s hope was to write a novel where her royalties go to Cancer Research UK. ‘Her Last Lie’ is that book, and all of Amanda’s royalties for ebooks will go to that charity.

#1 Bestseller ‘Her Last Lie’ is her debut novel.

She is presently writing her second psychological thriller, which will be published by HQ Digital/HarperCollins in 2019.