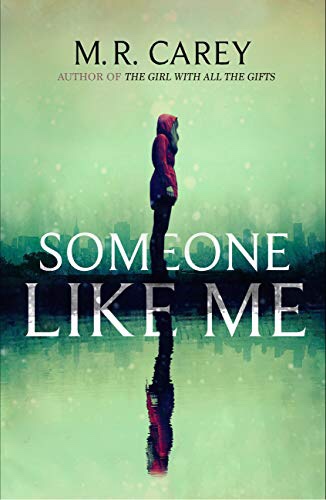 Today I’m thrilled to be sharing my review of Someone Like Me by M.R. Carey as part of the blog tour. Huge thanks to Tracy Fenton for including me! 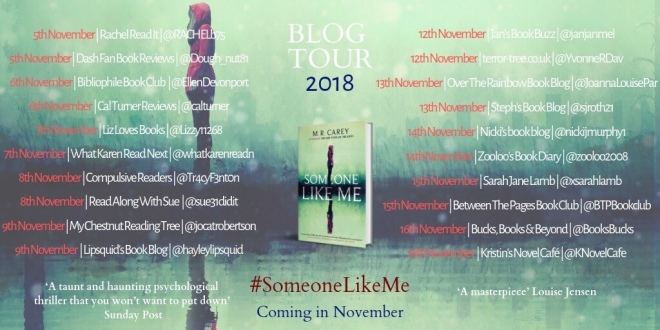 From the author of the million-copy bestseller The Girl With All the Gifts comes a heart-stopping psychological thriller with a twist you won’t see coming and a heroine you can’t trust . . .

THERE ARE TWO SIDES TO EVERY STORY.

Liz Kendall wouldn’t hurt a fly. Even when times get tough, she’s devoted to bringing up her kids in a loving home.

But there’s another side to Liz, one that’s dark and malicious. She will do anything to get her way – no matter how extreme.

And when her alter-ego takes control, the consequences are devastating.

Someone Like Me is the intoxicating new thriller from the phenomenal M. R. Carey. A modern take on the Jekyll and Hyde tale, think Gone Girl meets Stephen King – but you won’t have read anything quite like this before . . .

I loved The Girl With All The Gifts so jumped at the chance to read Someone Like Me but I had no idea how much this book would completely blow me away!! You won’t have read anything like this before and I have to say that it’s given me the biggest book hangover that I’ve had this year so far. Plus it’s a very strong contender for my book of the year which has shocked me almost as much as it’s probably shocked you! I would say that I’m surprised that a book of this genre would be topping my top reads of 2018 list but that in itself leads me to a dilemma, as I have absolutely NO IDEA how to categorise this book because it could fit into a multitude of genres! But as I don’t want to add a single spoiler to this review, I really can’t explain any more than that!

As with all the best psychological thrillers, there is a slowly built tension and a plot reveal that took me a little time to get used to so I would actually advise readers not to read any reviews of this book before they pick it up (apart from this one ofcourse!!) That way you can have no preconceived notions about what is about to happen and can just go with the flow! There was a “what the actual…??” moment near the start where I started to wonder just what I was getting into but that moment marked the start of my love affair with this book and with one character in particular!

I always become very involved with storylines that feature strong female protagonists and Liz and Fran both felt authentically created with convincing backstories. It was frighteningly easy to become engrossed with their believable lives and I became emotionally attached to them both. But I really don’t want to say anymore than that because I want this book to shock and surprise you as much as it did me! All I will say is that I sobbed my heart out towards the end and got to a point where I really, REALLY didn’t want this book to end.

M.R. Carey has produced a beautifully crafted masterpiece here that deserves to be a HUGE bestseller. It’s an intriguing idea, intelligently constructed but most of all it’s utterly addictive from beginning to end!! You will be thinking about this book for weeks to come and, if you’re anything like me, you’ll leave a little piece of your heart between its pages.

An absolutely brilliant book that I now want to read all over again. Loved it, loved it, LOVED IT!

M. R. Carey has been making up stories for most of his life. His novel The Girl With All the Gifts was a USA Today bestseller and is a major motion picture based on his BAFTA-nominated screenplay. Under the name Mike Carey he has written for both DC and Marvel, including critically acclaimed runs on X-Men and Fantastic Four, Marvel’s flagship superhero titles. His creator-owned books regularly appear in the New York Times bestseller list. He also has several previous novels, two radio plays, and a number of TV and movie screenplays to his credit.

9 thoughts on “Someone Like Me by M.R. Carey #BlogTour @Tr4cyF3nt0n @orbitbooks”