Today I’m delighted to feature a review of Who I Am by Sarah Simpson as part of the blog tour. 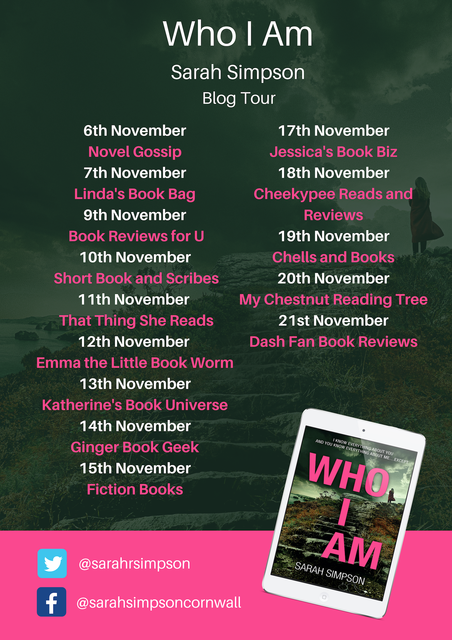 I know everything about you.

And you know everything about me… except
WHO I AM.

Andi met Camilla at university. Instantly best friends, they shared everything together. Until their long-planned graduation celebration ends in tragedy…

Years later, Andi is living a seemingly perfect life on the rugged Cornish Coast with her loving husband, happy children and dream home. Yet Andi is haunted by a secret she thought only she knew.

Someone out there is bringing Andi’s deepest fears to life. And she knows there’s no escaping the past that has come back to haunt her…

You trusted me with your secrets, you told me everything, you thought I was your best friend… but you have no idea WHO I AM.

Gripping, unputdownable and packed with twists and turns from the first page to the very last, this stunning psychological thriller will make you question whether we can ever really trust the ones we love.

Having enjoyed Her Greatest Mistake, I made sure I had Sarah Simpsons second book on preorder and managed to read it pretty close to publication day. What I enjoy about Sarah’s books is that she has a great understanding of how a character driven psychological thriller should be developed and Who I Am shows off those skills to great effect.

Andi lives an idyllic life in Cornwall with her husband and children but she seems agitated and nervous about something which is spoiling those relationships. It seems to be related to her university days and the group of friends she belonged to there so when she starts getting strange messages relating to that time, her behaviour starts to deteriorate.

The storyline is set in the present day but also flashes back to those uni days where we hear differing viewpoints from those friends. There is ofcourse a slow build up to what happened all those years ago and at times it did get a little confusing but this is a complex and twisty tale of toxic friendships that needed to be gradually unraveled, detail by minute detail.

The sumptuous settings of Cornwall and Edinburgh were brought to life with such vibrancy that I had the perfect sense of time and place throughout the narrative. Having been at uni myself in Edinburgh, I immediately recognised landmarks used and felt as though I were back in the city alongside those characters due to the vivid descriptive language used throughout.

Towards the end the action started to speed up a little and when the twists came they were shocking, but not totally unexpected from my point of view! But I didn’t predict the identity of the mystery narrator so that really added to my enjoyment as I loved the way everything came together towards the end. Sarah Simpson managed to throw in some shocks that I really didn’t see coming and left me feeling as though I had played right into her hands!

An engrossing and beautifully written book that would be perfect for fans of Lies Between Us by Ronnie Turner.

Her Greatest Mistake is Sarah’s debut novel and this reached 16 in the overall UK Kindle chart and achieved a best-seller flag within the specific genre. It also reached the top 10 in both Australia and Canada and again achieved the best-seller flag.

Her second psychological novel – Who I Am was released 6th November, 2018 and is now available online at all major retailers. And I Know You’re There the third book is coming very soon on 16th April 2019….

Sarah has a first class honours degree in psychology with post-graduate qualifications. She is relatively late to the writing scene, despite a love of books and writing from when she was very young, it wasn’t until 2016 that she sat down to put pen to paper. Her Greatest Mistake was then some twelve months in creation, followed by some vigorous re-writing. In June 2017, she signed with her current agent Broo Doherty and shortly after was offered a three book publishing contract with Aria, Head of Zeus.

Sarah now lives in a small coastal town in beautiful Cornwall with her husband, three children, german shepherd and cat.

Sarah loves to hear from her readers so please do visit her at:

7 thoughts on “Who I Am by Sarah Simpson #blogtour”