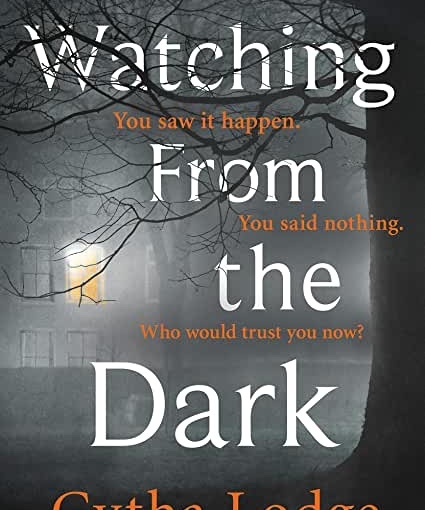 Today I’m sharing my review of Watching From The Dark, the new DCI Sheens novel from Gytha Lodge. Many thanks to Ella Watkins for my review copy of the book.

Aidan Poole logs onto his laptop late at night to Skype his girlfriend, Zoe. But to his horror, he realises she is not alone.

Completely helpless, all he can do is listen to the sounds of a violent struggle.

And then a chilling silence.

He’s desperate to find out if she is OK. But then why is he so hesitant to call the police?

When his messages finally reach them, DCI Jonah Sheens and his team take the case.

Watching from the Dark is an enthralling new thriller that you won’t want to miss.

I adored She Lies in Wait so this next book to feature DCI Jonah Sheens was high on my 2020 wish list! And it was so lovely to meet him again as he attempts to solve another crime. If you haven’t read She Lies In Wait then please be assured that Watching From The Dark reads like a stand-alone so you won’t feel like you’re missing out (even though you are, ofcourse, because She Likes In Wait is AMAZING!!).

The premise of Watching From The Dark grabbed me immediately. In this era of social media and online interactions, it’s a fascinating concept to have someone murdered whilst they are Skyping or FaceTiming and for the other person to witness it. So when Aidan Skyped his girlfriend Zoe, the last thing he expected was to hear her being attacked by a person unknown and unseen. But Aidan doesn’t call the police…WHY?! Surely he could have got someone to check out where Zoe lived just incase she was still alive and could be saved. But no, he did nothing apart from make an abandoned call to the police where he didn’t even leave his name. And as the plot unravels we find out more about their relationship and why things weren’t quite as rosy as he says they were…

This is an intriguing and twisty crime thriller where no one is quite who they say they are and secrets and lies have eaten away at the happy lives they should all be living. Jonah played his part in the investigation alongside his team as they dig deeper into Zoe’s private life. We also have flashbacks to Zoe and Aidans meeting and the progression of their relationship, in the hope of some clue as to why she has been murdered and by whom.

Watching In The Dark was a gripping crime thriller with a satisfying conclusion, even though I worked out quite early in the narrative what was going on and what had happened the night Zoe was killed. I really like Jonah and this crime series so hope there is more to come.

Watching In The Dark was published on February 6th by Michael Joseph.

Gytha Lodge is a writer and multi-award-winning playwright who lives in Cambridge. After studying creative writing at UEA, she was shortlisted for the Yeovil Literary Prize and the Arts’ Council England fiction awards, and developed a large online following for her young adult and children’s writing, with over five million reads accrued on platform Wattpad. She Lies in Wait is her debut novel.