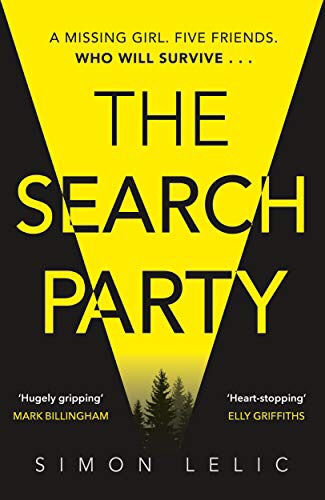 Today I’m delighted to be sharing my review of The Search Party by Simon Lelic as part of the blog tour. The book was published 14th August by Penguin.

Five friends set out into the woods to find her.

But they’re not just friends…

You see, this was never a search party.

And not everyone will make it home alive…

THE CHALK MAN meets THE HUNTING PARTY in this gripping story; witness four suspects as, alongside DI Fleet, you attempt to discover the truth about what happened to Sadie…

The Search Party is a twisty whodunnit told by the suspects themselves as they attempt to explain to DI Fleet what happened when they decide to do what they feel the police can’t, and find their missing friend Sadie Saunders who hasn’t been seen for 6 days. Fleet has his own worries though as he is back in his hometown for this case and it may be difficult for him to keep his personal and professional lives separated, making this case a little bit too close to home for him…

There are multiple narrators here as each of the friends give their own versions of what lead up to their discovery by the police and who’s is the body that they were found beside. Their narratives were often highly chaotic as though you were actually in the disorderly mind of a teenager! And those unreliable narratives keeps the reader guessing until the very end. The last few pages were a whirlwind of information as we finally got to find out what had happened to Sadie and why. I have to say that I didn’t guess, which is always a bonus for me!

It was DI Fleet though who kept me engrossed in this twisty storyline. His sections were my favourite and I became totally invested in his life and his determination to find out the truth about The Search Party. I can’t wait to meet him again in Simon Lelics next book which is already on my radar for next year.

Simon Lelic is the author of The Liar’s Room, The House (a Radio 2 Book Club choice and Observer Thriller of the Month), Rupture (winner of a Betty Trask Award and shortlisted for the John Creasy New Blood Dagger, as well as the Galaxy Book Awards), The Facility and The Child Who (longlisted for the CWA Gold Dagger and CWA Ian Fleming Steel Dagger 2012). The Haven, The Haven: Revolution and The Haven: Deadfall are his first books for young teenagers (11+). His newest novel, The Search Party, will be published in July 2020.

Simon is married, with three children, and lives in Brighton, England. Other than his family, reading is Simon’s biggest passion. He also holds a black belt in karate, in which he trains daily.