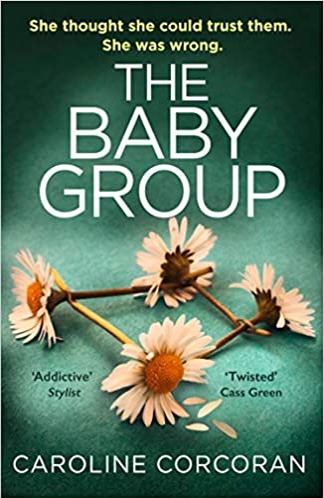 Her life was perfect. Until the video.

Scarlett’s golden life suddenly unravels when someone sends a shocking video of her to everyone she knows. The only people who claim they haven’t seen it are the friends in her new mothers’ group: Cora, Emma and Asha.

Scarlett is forced to delve into her past to discover who is out to get her. But as her circle of trust gathers around her, she has to ask – are her friends as innocent as they seem?

A gripping read about motherhood, secrets and lies, perfect for fans of Heidi Perks and B.A. Paris.

I’ve just sat on my sofa all afternoon reading The Baby Group from cover to cover! I was completely gripped by this group of women, none of whom were completely likeable, who were only thrown together because they met at antenatal classes. And I think we all know that feeling of becoming very close to other women where the only thing you have in common is a child of a similar age. This is probably an extreme case though!
When Scarlett returns to work after her maternity leave ends, it’s a rather frantic first day back but not for the reasons she was expecting! A sex tape that was recorded years ago has been sent to every single person she knows and so Scarlett turns her back on nearly everyone apart from her “baby group”. But is there a reason that the video wasn’t emailed to them? Considering they are now her closest allies and support bubble, why haven’t they been involved as well?
This was an addictive read with an entertaining but shocking premise at its heart. I felt as though I were watching a fly on the wall reality show at times and had that same guilty pleasure that envelopes me when I watch those on tv. It kept me guessing as to who hated Scarlett so much that they would try to ruin her life like this-or why!
As soon as I finished this I messaged my daughter saying “You HAVE to read this book!” which rarely happens nowadays so that shows you have desperately I want to have someone else to talk about this fabulous book to. And I’m so glad that Cheshire mums aren’t really like this…
Highly recommended!

Caroline Corcoran is an author whose first novel, Through The Wall, came out in October 2019. It was a Sunday Times Bestseller and translated into numerous foreign languages.

Her second book, The Baby Group, was released in September 2020.

As well as writing books, Caroline is a freelance lifestyle and popular culture journalist who has written and edited for most of the top magazines, newspapers and websites in the UK.

One thought on “The Baby Group by Caroline Corcoran”