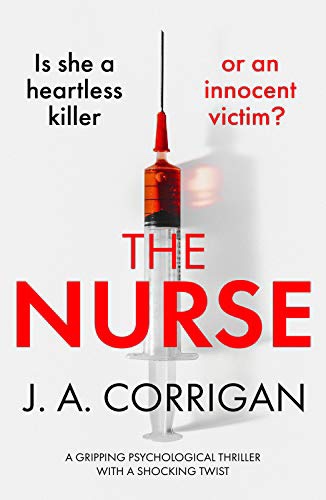 Today I’m on the blog tour for The Nurse by J.A. Corrigan. Many thanks to Emma Welton for the blog tour invite and my review copy of the book.

When you hear her story, will you believe her?

Rose Marlowe is a hard-working nurse, a loving wife, and a merciless killer. Or so she says. Despite her confession, it is hard to believe that this beautiful, kind woman could have killed her vulnerable patient in cold blood.

Down-on-his luck author and ex-journalist, Theo Hazel, is convinced that there’s more to what happened than Rose is telling, and so decides to visit her behind bars to write her story. His first surprise comes when Rose reveals that the victim was not a stranger to her.

A gripping and unputdownable thriller that will keep you guessing into the early hours of the morning. Perfect for fans of The Silent Patient, Shari Lapena and JP Delaney.

The Nurse is a brilliantly dark and twisty book with some very disturbing themes throughout but I just have to start by telling you just how much I absolutely loved this book! I did something that I very rarely do the moment I finish a book and that was to send the author a message to tell her just how much her book had affected me and how much I had loved reading it. In fact, I read the whole book on a Sunday afternoon because once I started it there was no way I was letting it go until I had unwrapped all its secrets…and OMG there were plenty of shocking moments revealed as the storyline cranked up the tension towards the last few gripping pages.

This is an intelligently plotted novel with a well crafted storyline told in the present with multiple flashbacks to the past. Rose Marlow, convicted murderer, opens up to writer Theo whilst she is in prison for a crime she has admitted to committing. But as Rose talks about her life, things come to light that may have some bearing on her conviction and Theo is convinced she is not a murderer. Their conversations were my favourite parts of The Nurse as I loved watching their connection build in that very difficult environment and how Theo becomes entranced by the woman he believes is innocent of murder. But we, the readers, are never quite as sure. Has Theo’s head been turned by a beautiful “woman in peril” with a hidden agenda? I didn’t know what to think as the author keeps us guessing as to how the past has influenced the present. The tapestry of Rose’s life unravels to lay bare some truly shocking secrets and when those threads finally come back together, I defy anyone not to be completely and utterly devastated and emotionally drained by the fallout.

The Nurse is a brilliantly compulsive read but it’s more than that-it’s heartbreaking, haunting and harrowing; a powerfully crafted tragedy that slowly wraps itself around your emotions, tightening its hold on you until it’s impossible to catch your breath. I knew I would probably like this book (I’ve previously read Falling Suns by the same author so knew that she likes to tackle some very emotive issues) but I had no idea just how much I would become emotionally involved with these characters-their story overwhelmed me at times but I had to stay with them until the very end, no matter what happened…

This has to be one of my most difficult reviews to write as I know nothing I write will do this book justice plus I’m terrified of revealing spoilers! The Nurse delivered far more than I was expecting and is a book that I know will stay with me for a long time-just as Falling Suns did. A highly recommended psychological thriller that will keep you up till the small hours-you have been warned!

Julie-Ann was born in Mansfield, Nottinghamshire. She studied in London, completing a BA (Hons) Humanities degree, majoring in Modern History and English Literature. Travelling in Europe for several years, she taught in both Greece and Spain – countries and cultures she found fascinating. On return to the UK she gained a BSc (Physiotherapy), becoming a Chartered Physiotherapist. She lives in Berkshire with her family.

2 thoughts on “The Nurse by J.A. Corrigan @damppebbles @juliannwriter @canelo_co”