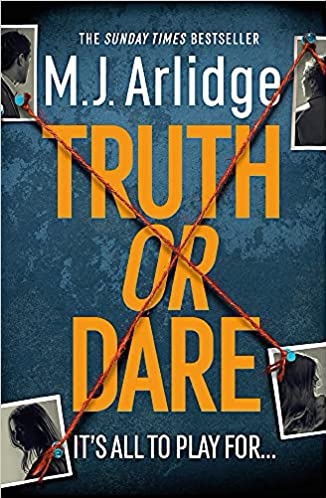 DO YOU WANT TO PLAY THE GAME?

THE BRAND NEW THRILLER FROM THE MIND OF MILLION-COPY BESTSELLER M. J. ARLIDGE

A crimewave sweeps through the city and no-one is safe. An arson at the docks. A carjacking gone wrong. A murder in a country park. What connects all these crimes without causes, which leave no clues?

Detective Inspector Helen Grace faces the rising tide of cases which threatens to drown the city. But each crime is just a piece of a puzzle which is falling into place.

And when it becomes clear just how twisted and ingenious this web of crime is, D.I. Grace will realise that it may be impossible to stop it . . .

THE BEST BOOK YET FROM THE MASTER OF THE KILLER THRILLER.

There aren’t many crime series that I stick with for this long (I can count them on one hand!) but DI Helen Grace is one of the best fictional detectives out there and well overdue her own tv series! M.J. Arlidge is a very experienced writer of the crime and this comes across in his books too as they are very visual with short chapters-perfect for transporting onto the small screen. This is the 10th book in this gripping series and once again it’s a fast paced game of cat and mouse for Helen as she struggles to make sense of some very violent but difficult to solve crimes that are spreading through her patch.

This is a twisty case for DI Helen Grace who is also experiencing some personal betrayal in her own life as well. And as this is the equivalent of trying to do a two sided 1000 piece puzzle with no picture to help you, it’s also quite confusing for the reader to begin with as well! There are lots of characters who are seemingly unconnected so there’s a great deal to keep up with during the first half of this crime thriller. Set over 7 days, the shorter chapters and fast paced police procedures keep the tension as high as the body count! I thought I had an idea of what was going on but I have to admit that I was further of the mark than I would have liked to be! And when I turned the final page I was furious that it was all over!

There is still plenty to come from DI Helen Grace and I can’t wait to see where M.J. Arlidge takes her next. Truth or Dare is a compelling addition to this series and you really need to check the whole series out if you haven’t done so already.

M. J. Arlidge has worked in television for the last twenty years, specialising in high-end drama production, including prime-time crime serials Silent Witness, Torn, The Little House and, most recently, the hit ITV show Innocent. In 2015 his audiobook exclusive Six Degrees of Assassinationwas a number-one bestseller. His debut thriller, Eeny Meeny, was the UK’s bestselling crime debut of 2014 and has been followed by 8 more DI Helen Grace bestsellers