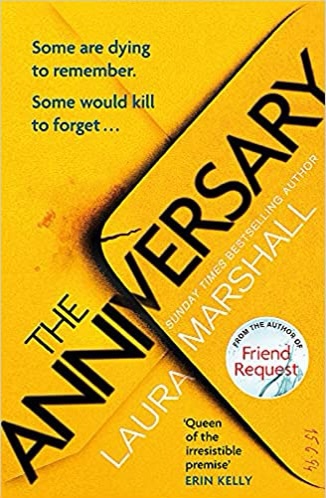 Some are dying to remember.
Some would kill to forget . . .

On 15th June 1994, Travis Green – husband, father, upstanding citizen – walked through the streets of Hartstead and killed eleven of his neighbours. The final victim was four-year-old Cassie Colman’s father.

As the twenty-five year anniversary approaches, Cassie would rather forget the past – even as her mother struggles to remember it at all. Then something hidden in her mother’s possessions suggests those eleven murders were not what everyone believes.

Once Cassie suspects she’s been lied to about the most important event of her life, she can’t stop digging up the past.

But someone will do anything to keep it buried .

I absolutely loved this book so much! To be honest, when I picked it up I hadn’t actually given too much thought as to what The Anniversary was, so was surprised by the fact it’s not a wedding anniversary but the anniversary of an horrific and heinous crime. It’s 25 years since Travis Green committed a “Hungerford” style massacre, killing neighbours and residents of the town where he lived. Eleven people lost their lives that day including Cassie’s dad. And as the anniversary approaches, Cassie discovers a photo in her mother’s belongings that give a clue about what really happened that day and it’s not as random as everyone had previously thought…

The opening of The Anniversary was incredibly chilling as Travis Green sits planning the day he has ahead of him. We aren’t given too many clues about why he is about to commit multiple murders although he hints that his wife will understand exactly why he’s about to do what he does. To be inside the head of a killer as he justifies to himself who he will let live was deeply disturbing as the reason for his future crime floats around his head.

Cassie was a likeable character who made some questionable decisions due to her nativity and the fact that she obviously wasn’t a great judge of character, as seen when her past is revealed! But she is struggling, her father long gone and her mother now disappearing into her own mind due to her Alzheimer’s so returning to the scene of the crime at a time when the country’s spotlight is focused on her home town was a difficult time for her. She also has other personal dilemmas to face so the fact that it looks like her own mother has been keeping secrets from her seems to tip her over the edge!

The Anniversary is a gripping read, full of twists and turns that I wasn’t expecting. I think this is Laura Marshalls best book so far and it’s certainly my favourite of the three she has written. It grabbed my attention from that very first introduction to Travis Green and I couldn’t put it down until I had discovered the real truth about this horrible crime. A book that made me question everything that I was being told in a storyline that seemed far more likely that I would ever want to believe. A brilliant read!

Laura Marshall is the Sunday Times top ten and Kindle No. 1 bestselling author of three psychological thrillers. Her first two novels, FRIEND REQUEST and THREE LITTLE LIES have sold over half a million copies in the UK and been translated into twenty-five languages. Her third novel, THE ANNIVERSARY, will be released on 5th August 2021.

She grew up in Wiltshire, studied English at the University of Sussex and currently lives in Kent with her family.