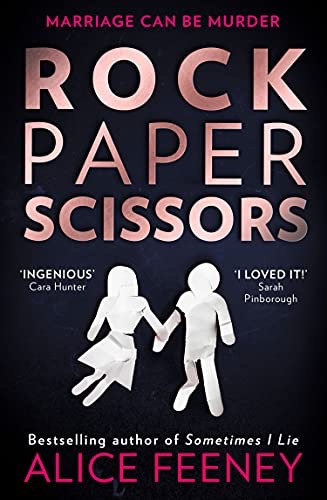 Adam and Amelia are spending the weekend in the Scottish Highlands. The remote location is perfect for what they have planned.

But when their romantic trip takes a dark turn, they both start to wonder – can they trust the one they’re with?

Because every couple tells little white lies. Only for Adam and Amelia, the truth is far more dangerous.

Once again Alice Feeney has smashed it out of the park with her twisty, disturbing and creepy fourth novel. I’ve been a huge fan of this author since her debut novel Sometimes I Lie and I understand most of her books are now being adapted for tv-although I have NO idea how they will handle this one as one of the characters has face blindness (prosopagnosia) so I will be very intrigued to see the finished production! But if ever a book has the most perfect setting to be transported to a visual adaptation then this is it!

Rock Paper Scissors is a book it’s best to go into blind (see what I did there!) as the blurb tells you all you really need to know. Set in the Scottish Highlands, I immediately got a sense of isolation as Adam and Amelia arrive at their weekend break in a desolate, snowy and unsettling landscape, with a converted chapel as their destination for…well, the reader isn’t immediately sure! Both visitors are hiding things from their other half and the lies seem to drip as easily from their lips as the expensive wines they find in the very well stocked wine cellar. And it’s there that they discover information about the chapel that gives them goosebumps. What happens next whilst they are stuck in this secluded and very chilling venue is a twisty, “mess with your mind” shockfest that made me gasp out loud with its brilliance…

I absolutely devoured Rock Paper Scissors with its cleverly crafted plot and therefore have no doubt it will appear in my top books of 2021 compilation at the end of the year. Loved, loved, LOVED IT!

Alice Feeney is a New York Times bestselling author and journalist. Her debut novel, Sometimes I Lie, was an international bestseller, has been translated into over twenty languages, and is being made into a TV series by Warner Bros. starring Sarah Michelle Gellar. His & Hers is also being adapted for screen by Jessica Chastain’s Freckle Films. Alice was a BBC Journalist for fifteen years, and now lives in the British countryside with her family. Rock Paper Scissors is her fourth novel and is being made into a TV series for Netflix by the producer of The Crown. It will be published around the world in 2021.