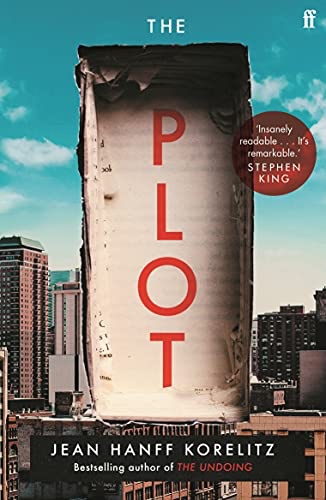 When a young writer dies before completing his first novel, his teacher, Jake, (himself a failed novelist) helps himself to its plot. The resulting book is a phenomenal success. But what if somebody out there knows?

Somebody does. And if Jake can’t figure out who he’s dealing with, he risks something far worse than the loss of his career.

Having watched The Undoing recently when it was adapted for a television series, I knew I wanted to explore more by the author Jean Hanff Korelitz. So when an opportunity to read The Plot came along, I jumped at the chance to read it.

The “novel within a novel” idea has been done before but I think it has been used to perfection here. I have to start by saying that to begin with I really wasn’t sure about the book, the first third is quite a slow burn as it sets the scene and the pace for what is ahead. And for me it was never really about who was harassing Jake about the fact he had stolen the plot for his bestselling novel as I thought that it wasn’t that hard to guess who it was. But it was the why that interested me. Jake only takes the plot from his old student once he hears of his death-he doesn’t copy any words as everything is his own work. So he deserves the success…doesn’t he?! As other characters say, there aren’t that many plots in the literary world so surely every work of fiction is just a variation on another? So whoever knew about the “theft” was obviously connected to his student in some way meaning that the plot maybe wasn’t quite as made up as he had convinced those who had read it…

This is a compelling literary thriller, slow burning and beautifully written with a satisfying conclusion. By the time I got half way through I was completely hooked and couldn’t put it down. I adore this authors writing and can’t wait to read her next book out in 2022.

Jean Hanff Korelitz was born and raised in New York City and educated at Dartmouth College and Clare College, Cambridge. She is the author of seven novels, including The Devil and Webster, You Should Have Known (adapted as the 2020 HBO series The Undoing, starring Nicole Kidman, Hugh Grant and Donald Sutherland), Admission (adapted as the 2013 film of the same name, starring Tina Fey, Lily Tomlin and Paul Rudd), The White Rose, The Sabbathday River and A Jury of Her Peers. With Paul Muldoon she adapted James Joyce’s The Dead as an immersive theatrical event, The Dead 1904. She and her husband, poet Paul Muldoon, are the parents of two children and live in New York City. A new novel, The Latecomer, will be published in 2022.

2 thoughts on “The Plot by Jean Hanff Korelitz @hannahturnerx”