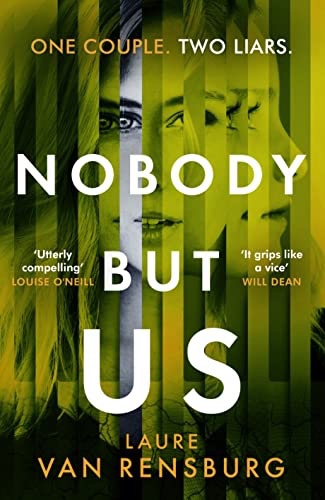 Together, they are driving south from New York, for their first holiday: three days in an isolated cabin, far from the city.

Ahead of them, the promise of long, dark nights – and the chance to explore one another’s bodies, away from disapproving eyes.

It should be a perfect, romantic trip for two.

EXCEPT THAT HE’S NOT WHO HE SAYS HE IS.

What a claustrophobic and intense read One of Us is! It made for very uncomfortable reading at times too-especially due to the themes twisting around this very clever plot-and I found myself having to have more breaks than usual away from the book because it often felt too much to take in. This book takes a relationship that we think we know and completely breaks it down to the bare bones and underneath those secrets and lies hides something even worse…

Steven and Ellie are off on a trip together to an isolated cabin in the woods. They seem to be looking forward to time spent away from everyone else, time to enjoy each other’s company in a quiet and peaceful location. But from the start, something feels off about these two! The college professor and a younger student seemed such a cliché but it became quickly obvious that this was no normal romance and the reader picks up on the signs that they both have secrets they are keeping from the other. I can’t say I found either of them very personable but Steven really did give me the creeps with his attitude.

This is a timely response to recent events, delivering a fictional couple who both have their own agenda and we know from the first few pages that this romantic break isn’t going to end well! I love it when a book makes you feel uncomfortable about the circumstances of the storyline and Nobody But Us kept up that intensity throughout this cat and mouse tactical play off. One of those books you want to shower off you when finished!

Laure Van Rensburg is a French writer living in the UK and an Ink Academy alumna. Her stories have appeared in online magazines and anthologies such as Litro Magazine, Storgy Magazine, The Real Jazz Baby (2020 Best Anthology, Saboteur Awards 2020), and FIVE:2:ONE. She has also placed in competitions including 2018 & 2019 Bath Short Story Award.

2 thoughts on “Nobody but Us by Laure Van Rensburg”