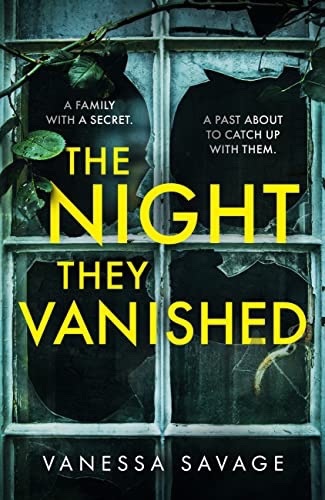 A family with a secret.
A past about to catch up with them.

At thirty, Hanna has finally decided she’s better off without her family. They hold her responsible for the incident that ruined their lives fourteen years ago and they’ve barely spoken since.

But then, whilst browsing a true crime website, she sees her family home listed as the site of a brutal murder. Number of victims: three. Date of crime: today. When the police investigate, they find no bodies, but the house is abandoned. Hanna’s family have disappeared.


To find them, Hanna will have to confront what happened all those years ago.

And the person determined to make her pay for it . . .

Vanessa Savage has been a favourite author since I read The Woman in the Dark so I was thrilled to be able to read an ARC of The Night They Vanished. This is gripping psychological thriller with a great premise! What would happen if you logged onto a true crime “tourist” website and saw an entry about your old home? And if the crime is murder and the victims are your family, what can you do? Especially if the date of these supposed murders is today…

I loved Hanna! I know others would maybe find her a little difficult to understand but I completely got why she no longer had any contact with her family! But the more you delve under the surface of this family fallout, the more you realise that things are quite as they appear! Hanna is obviously running from something terrible that’s happened in her past but does she deserve the vitriol directed at her when she decides to go back to the town that turned her back on her? As she investigates the disappearance of her family, the narrative flashes back a few months to her half sister, Sasha. What if anything does Sasha have to do with why her family vanish overnight? With the help of her friend Dee and new boyfriend Adam, Hanna is determined to find out.

The split narrative worked really well here as Sasha provided the up to date problems within the family giving more clues as to why a seemingly happy family have just vanished off the face of the earth. She’s a typical teenager but struggling with an overprotective father and a mother who won’t stand up for her. She misses Hanna and doesn’t understand why her sister never comes home and I found her relatable and likeable. But has she made some questionable decisions regarding those she hangs around with. Someone wants Hanna to suffer but who and why has it taken 14 years to put their plan into action?

I was completely gripped by this dark and intriguing storyline and surprised by some of the early twists that threw me off my game! The narrative certainly didn’t go the way I was expecting and I liked that! Family secrets can destroy the people you are trying to protect so once they are revealed the fallout can be shocking and upsetting so it was good to see the characters acting in a way that made total sense in their situation. Vanessa Savage engages you in their relationships so that you also feel the emotional fallout once the truth becomes known.

Vanessa Savage lives by the sea in South Wales with her husband and two daughters.