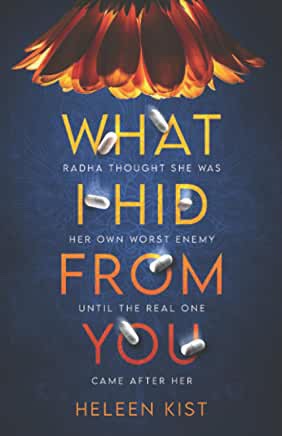 Traumatised by the death of a patient in her chair, Glaswegian dentist Radha Bakshi succumbs to an addiction to Valium she can’t acknowledge, even to herself.

The pills take the edge off trying to be the consummate professional, perfect daughter, devoted wife and a not-too-embarrassing mother to her teenage son.

When increased scrutiny of her work forces her to find a new source of supply, she stumbles into the menacing clutches of blackmailing drug dealers.

A mistake that could cost her everything.

A gripping psychological thriller about the sadly common, insidious substance abuse among healthcare workers and the complexity of familial relationships as children grow up.

I’ve enjoyed previous books by Heleen Kist so I knew her newest book What I Hid From You was one I wanted to read so huge thanks to Kelly Lacey at Love Books Tours for inviting me onto the blog tour and arranging a review copy for me.

Someone told me once that the suicide rate amongst dentists was the highest of any other profession. Now I don’t know if that’s true or an urban myth but I do know that it’s an incredibly stressful job-look at how many of us hate going to the dentist! The opening of What I Hid From You introduces the reader to Radha, a dentist from Glasgow who is struggling to cope with the death of patient in her chair. This trauma has left with with an obviously undiagnosed case of PTSD and to help herself deal with those flashbacks she has become addicted to Valium. Radha felt very familiar to me-a mother struggling to be the best at her job, a good wife and mother plus being a daughter to make her father proud. Her relationship with her son became a large part of the storyline as she felt she was losing him and was desperate to have back the bond she had with him when younger. Heleen made her so relatable and I felt every panicky moment alongside her when her drug addiction starts to affect all areas of her life.

Family relationships are at the heart of this suspenseful thriller. It’s beautifully written and expertly delivers a strong connection to the characters. And as the plot line descends towards its shocking and dramatic conclusion, I found myself slowing down unwilling to end that connection. A compelling and honest look at the effects of trauma on family life.

Heleen Kist is a Dutch, formerly globetrotting career woman who fell in love with a Scotsman and his country, and now writes about its (sometimes scary) people from her garden office in Glasgow.

She was chosen as an up-and-coming new author at Bloody Scotland 2018. Her debut, ‘In Servitude’, won the silver medal for Best European Fiction at the Independent Publishers Book Awards in the USA and was shortlisted for The Selfies awarded at London Book Fair. Her feminist thriller ‘Stay Mad, Sweetheart’ was a finalist in the Next Generation Indie Book Awards and won third place in the inaugural Book Bloggers’ Novel of the Year award 2020. ‘What I Hid From You’ is her third novel, set next door to ‘In Servitude’ – for fun.

Heleen hopes you enjoy her writing, and would love to hear from you on twitter (@hkist), Faceboook (@heleenkistauthor) or Goodreads. You can also sign up to her newsletter on http://www.heleenkist.com.