Today I’m very happy to be a stop on the blog tour for The Method by Shannon Kirk. 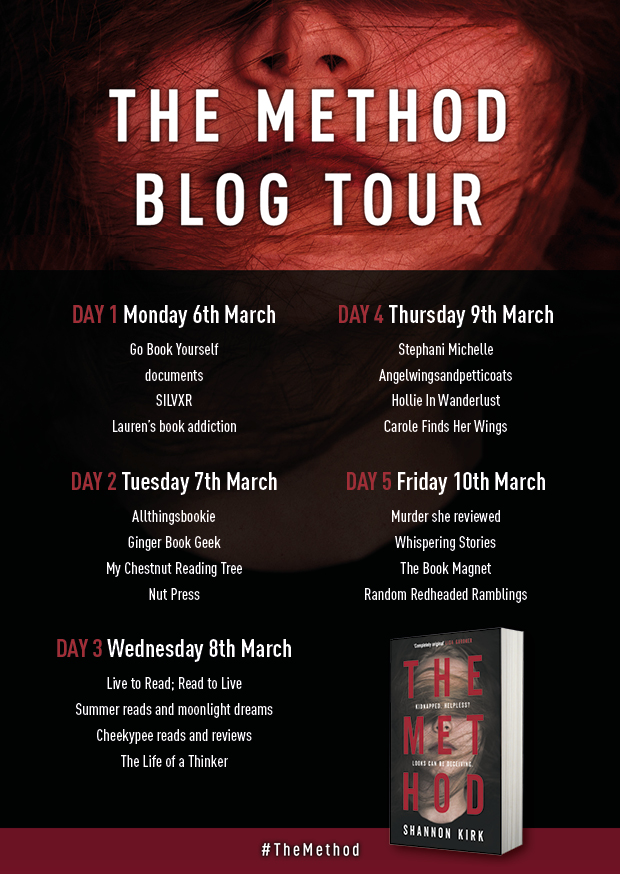 What would you do if you were kidnapped and held captive whilst heavily pregnant? Would you submit, or would you subvert?

Lisbeth Salander meets Pierre Lemaitre’s Alex in this original debut thriller with a heroine like no other.

If you’re anyone else you give in, but if you’re a manipulative prodigy you fight back in the only way you can. You use what you’ve been given against your captors.

You have only one chance to save your life and that of your unborn child. You’re calculating, methodical, and as your kidnappers are about to discover, they made a big mistake in abducting you.

What happens when the victim is just as dangerous as the captors?

I was rather intrigued when I saw the blurb for this one as I do love a strong, kick-ass heroine but a heavily pregnant 16 year old? This I had to see. But I do warn you that once you start this you will not want to put it down.

When we first meet our captive expectant mother she has already been snatched 4 days previously and we come to realise quite quickly that this is not your average teenage girl! She has already started to accumulate her “assets” mentally, and possibly physically if she is able to as well. Every tiny little experience is examined, picked apart and filed away for future reference. This girl is not going down without a fight and she’s not going to let a little thing like being 7 months pregnant stop her!

The Method has apparently been optioned for a major film and I can see why now that I have read it. The action taking place within the building is claustrophobic and intense with plenty of visual clues. Looking for the girl is Special Agent Roger Lui and his partner “Lola” and this thread makes for a fascinating adrenaline fuelled search that again I could see converting well to a gripping cinematic experience.

I found myself totally engrossed in this pretty much from the first page. Once the escape is planned I presumed that the end was in sight but there were plenty more twists and turns to come and the last chapter was positively chilling but emotionally uplifting at the same time. I loved the explanation of how the “assets” were possibly to be used in the planned escape – it was detailed and inventive and my blood pressure must have been sky high at one point! This storyline had heart racing, “hands over the eyes” suspense that managed to feel fresh and exciting with well researched plotlines.

If you love a strong female protagonist, who may be hiding a few secrets of her own then this book is definitely for you. At times it had the feel of a young adult book but with some quite graphic language and violence in places. Subsequently, my daughter has been chomping at the bit for me to finish it as she’s desperate to read it too. And I have a feeling she’s going to enjoy it as much as I did!

Many thanks to Clara at Little Brown for my copy of The Method.

The Method: A gripping thriller with a heroine like no other

is out now published by LittleBrownUK and is available to purchase from Amazon UK.

Shannon Kirk is a practicing attorney and law professor. She attended West Virginia Wesleyan and St John’s Universities, is a graduate of Suffolk Law School, and was a trial lawyer in Chicago prior to moving to Massachusetts. She has been honored three times by the Faulkner Society in the William Faulkner-William Wisdom Creative Writing Competition. She lives in Massachusetts with her husband, a physicist, and their son.

The Method received a distinction from the School Library Journal as one of the best adult books for teens and won the 2015 National Indie Excellence Award for best suspense. It has also been optioned for a major motion film by Next Wednesday Films and will be translated into several languages worldwide.