She can’t remember the last year. Her husband wants to keep it that way.

Dramatic psychological suspense for fans of Liane Moriarty’s The Husband’s Secret, Clare Mackintosh’s I Let You Go, and Linda Green’s While My Eyes Were Closed.

When Jo Harding falls down the stairs at home, she wakes up in hospital with partial amnesia – she’s lost a whole year of memories.

A lot can happen in a year. Was Jo having an affair? Lying to her family? Starting a new life?

She can’t remember what she did – or what happened the night she fell.

But she’s beginning to realise she might not be as good a wife and mother as she thought.

Now everyone knows I LOVE a dysfunctional family (rumours that this is because it shows my own family in a slightly better light are of course unfounded!!) so I was totally tempted by the blurb of Close To Me which seemed right up my street, with family secrets lying at the heart of this memory loss suspense.

I wasn’t sure if I would take to Jo but as we shared a name and are of a similar age I wanted to give her a chance. Jo is struggling after a fall has left her with amnesia, not a total memory loss though, just of the last year. And it’s pretty obvious that her family are all keeping secrets about things that have happened in that year. Jo is having a few flashbacks though and although they seem to be rather erotic in nature, she has always been a faithful and loving wife……hasn’t she? Could her lost year really be hiding THAT much? As the plot unfold in the days following her “accident” we also get glimpses of the life Jo was living leading up to it. And as the plot progressed I actually came to like Jo and felt an empathy with her that came easier than I had thought it would.

One of the things I liked about Close To Me was the family dynamics and the rather realistic dramatic reactions to things that were happening. It came across like a reality show at times, with “looks” between different family members, non communicative children and lots of emotional responses once hidden secrets had been revealed. With Jo being of the age she was, she had to deal with “empty nest syndrome” as well which cruelly often coincides with the menopause which can make women more emotional and sensitive as well as having a dramatic effect on their sex life. Jo thinks she may have had an affair but if so who with? And is that the reason that she feels her fall wasn’t an accident? Due to the way the story was set out, sometimes we could see what had lead to events before Jo did but the twists and turns towards the end weren’t the ones that I had been expecting! I trusted nobody in this book and that’s just the way I like it!

I  read a lot of books now that have similar themes so it does take a lot to stand out for me but I did rather enjoy Close To Me and even read it in one session which says it all. 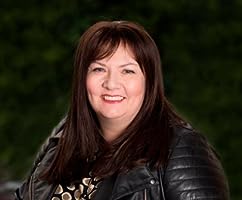 Amanda Reynolds is an author and creative writing tutor. Her debut novel, Close To Me, will be published in 2017 by Wildfire (a new imprint of Headline) as their first fiction title. She lives in the Cotswolds with her family and two very furry dogs.
Amanda has worked as a goat milker, a teaching assistant and a sales trainer. More recently she was the book reviewer for The Cheltonian and taught regular creative writing classes and workshops.
She now writes full-time, taking a sabbatical from teaching to write her second book, another psychological suspense (due out in 2018).
Advertisement
Hundreds & Thousands of Books