Her breath rose and fell in fearful gasps but it was too late. She could already see what she dreaded most. The back seat was empty.

Her little girl was gone.

Abigail lives the perfect life with her doting husband and adorable baby Izzy. But someone knows a secret about Abigail and they want the truth to be told.

When Izzy is snatched from a carpark, it becomes a case for Detective Robyn Carter. Someone has been sending threatening messages to Abigail from an anonymous number. What is Abigail hiding?

Robyn’s instincts tell her there’s a connection between Izzy’s abduction and two murders she is investigating. But the last time she acted on impulse her fiancé was killed. To break this case and earn her place back on the force, she must learn to trust herself again – and fast. Robyn is on the hunt for a ruthless serial killer. And unless she gets to the twisted individual in time a little girl will die …

When I saw that the second book in the Robyn Carter crime series was due out I have to give myself a kick up the backside as I still had the first book Little Girl Lost languishing in my TBR pile on my kindle. And so I knew I needed to catch up on it before book 2 came out. To be honest I had started to read it before but only got as far as the end of the prologue before I had to put it down. At the time I couldn’t cope with the very distressing scenes within those pages. But I had heard so many wonderful things about this book that I decided to power through and boy, was I glad that I did!

So as I said before the start of this book gave me serious chills with its descriptions of a shockingly violent reaction to a heinous act but it acted as a springboard for a twisty and gripping page turner that was impossible to put down! Rarely do I become so emotionally involved with a crime book to the extent of actually wanting to climb into the book and become part of its storyline! I wanted to give certain characters a damn good shake to make them see what was in front of their eyes! I got so frustrated and although there was an obvious link to that little girl when all the horrible things started happening to Abigail, I just wanted to step in, mother that child and change the course of her destiny! And the scenes when baby Izzy went missing were just terrifying, I felt physically sick with worry that she was in the hands of such an unemotional, sick minded individual!

This book was so much better than I had allowed myself to hope for and it’s difficult to believe that this is the authors first psychological crime thriller! Having loved her books in the past for their humorous observations, it was exciting to see that her writing has transferred so well into another genre. The twists and turns here meant that I trusted no one and was constantly changing my mind about who was targeting Abigail and why. And I know I keep using the word gripping but that’s the best way I can describe Little Girl Lost – you will be swept into this intriguing chain of events and just won’t be able to put it down! I loved Robyn Carter, she’s an intelligent and methodical detective that never gives up, bringing together these cases with a confident calmness that means she is trusted implicitly by the people she is trying to help. I can’t wait to meet her again in book 2 Secrets of the Dead which is out on 30th May!

Little Girl Lost: A gripping thriller that will have you hooked (Detective Robyn Carter crime thriller series Book 1) is available now to purchase at Amazon UK

Secrets of the Dead: A serial killer thriller that will have you hooked (Detective Robyn Carter crime thriller series Book 2)

will be published by Bookouture on 30th May 2017 and can be pre-ordered by clicking the title above. 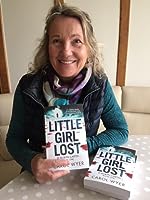 Carol E. Wyer is an award-winning author whose humorous books take a light-hearted look at getting older and encourage others to age disgracefully. More recently she has chosen to write for the “dark side” and embarked on a series of thrillers, starting with the gripping best-seller, Little Girl Lost.
Her book Grumpy Old Menopause won The People’s Book Prize Award for non-fiction 2015.
Carol has been interviewed on numerous radio shows discussing ‘Irritable Male Syndrome’ and ‘Ageing Disgracefully’ and on BBC Breakfast television. She has had articles published in national magazines ‘Woman’s Weekly’ featured in ‘Take A Break’, ‘Choice’, ‘Yours’ and ‘Woman’s Own’ magazines and writes regularly for The Huffington Post.
Carol is a signed author with Bookouture and Delancey Press.
Advertisement

A serial killer to chill your bones

He has planned well. He leads two lives. In one he’s just like anyone else. But in the other he is the caretaker of his family’s macabre museum.

Now the time has come to add to his collection. He is ready to feed his obsession, and he is on the hunt.

Jakey Frith and Clara Foyle have something in common. They have what he needs.

What begins is a terrifying cat-and-mouse game between the sinister collector, Jakey’s father and Etta Fitzroy, a troubled detective investigating a spate of abductions.

Set in London’s Blackheath, Rattle by Fiona Cummins explores the seam of darkness that runs through us all; the struggle between light and shadow, redemption and revenge.

It is a glimpse into the mind of a sinister psychopath. And it’s also a story about not giving up hope when it seems that all hope is already lost.

Now I’m a bit of a wimp when it comes to horror! I physically can’t watch horror films and I can’t read horror books either, mainly as it would be rather difficult to read with a huge cushion in front of my eyes. They tend to get into my head and transfer to my nightmares way too easily for me! Concerned that I was only missing out on Rattle due to my nervous disposition, I became determined to “man up” and give it a go. I was rather worried though about comparisons to Silence of the Lambs, a book I was too scared to read and a film I had only heard (that big cushion again!) But fear not, this is so much more than a scary serial killer crime thriller. Or should I say be afraid, be VERY afraid because Rattle is also a terrifying shock fest with a totally unique and gripping plot. Yes, it scared the **** out of me but I loved every minute!

The Bone Collector is one of the creepiest and darkest characters I think I have ever come across. His quest to secure the best exhibits for his personal museum sees him methodically hunting down his victims based on the unique pathology of their bone disorders. And children are very much top of his grotesque shopping list. I could feel my blood pressure rising as I kept reading “just one more chapter”, terrified by the thought of what was about to happen to those poor children. But the stylish writing and the remarkable character creations, especially that of detective Etta Fitzroy, kept me turning the pages-there was no way I was going to let The Bone Collector scare me away! I loved Etta’s determination and how the search for closure for previous victims took over to such an extent that it affected her personal life.

Once picked up you won’t be letting this book out of your sight. It’s a completely engrossing tale that really stands out from the crowd with its dark and chilling storyline but I had the feeling that it was also sending out an unexpected message of hope. I felt like I had been living out my own personal fears of loss and mortality alongside the affected families, with The Bone Collector a ghostly “grim reaper” presence, watching and waiting in the shadows. But by the end, I actually felt quite uplifted, which surprised me and I do love a book that messes with my emotions as you well know!

This is a fantastic debut and I can’t wait to see where Fiona Cummins takes us next. Be warned though that it can be rather gory in places, as you might expect from the cover blurb, so that’s worth remembering if you are a little bit squeamish. But for me, every gruesome detail was a relevant necessity and I didn’t hide behind that cushion once!

is published on 26th January by MacMillan and is available to purchase from Amazon UK here.

Fiona Cummins is an award-winning former Daily Mirror showbusiness journalist and a graduate of the Faber Academy Writing A Novel course. She lives in Essex with her family. Rattle is her first novel.